When we were approached to engineer an ice bar, we jumped at the chance. The Eis Haus is the brainchild of Phillip Hughes of Running Bear Productions, who originally founded the Ice Box in 1993 and who has designed and created ice projects around the world.

The ISO Spaces team worked closely with Phillip to engineer a 20ft container alongside two 40ft containers, both of which had a key criteria; to sustain temperatures as low as -20° as well as housing over 10 tonnes of purified crystal clear ice. Marketed as an urban alpine resort with an après ski vibe, the Eis Haus has `a carved real ice interior, new and original at every location. Inside, the team installed display screens to show winter and extreme sports showreels, as well as providing creative lighting and room for an ice photo booth.

The pop-up design also incorporated an outdoor alpine deck and installed heaters, alongside an outside bar, and an additional 10’ service container.

The build took just three weeks in our factory, incorporating state of the art engineering to ensure the low temperatures could be sustained. The design included an Alpine reception clad in reclaimed timber and a reinforced roof terrace for the installation of cars, DJ booth or product displays.

Philip Hughes, Creative Director of Eis Haus says: “From my initial concept to taking delivery of the finished product, working with ISO Spaces has been seamless. Their engineering prowess has delivered the basis and infrastructure for my business and we’re really excited as to what the future holds for this concept and are taking bookings at a range of settings and events.”

After being launched at The Telegraph’s Ski and Snowboard Show in November 2016, followed by The Tower of London Ice Rink. The bar is currently at The Magic Lantern Festival in Chiswick, London.

Get in touch to discuss your idea – as demonstrated by Eis Haus, anything is possible! 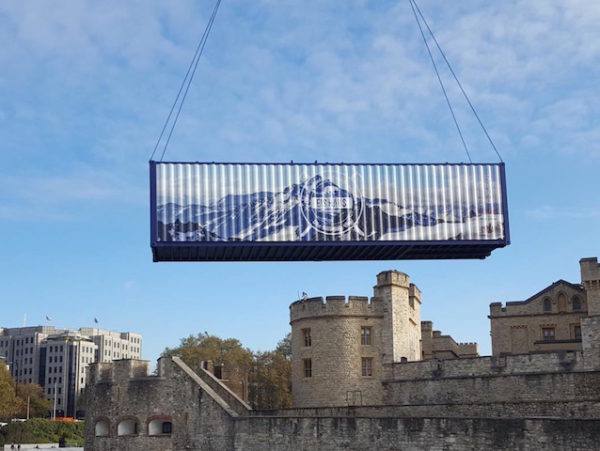 Do you have a project you want to discuss?